Mr. LL and I went to the New Orleans Comic Con over the weekend. We haven’t been since 2012 and, boy, has it grown!

We got free three day passes for working a booth for 3 hours on Sunday for my place of employment. Can’t beat that deal. We didn’t go Friday night but went Saturday for most of the day. Then of course, we worked Sunday morning and then wandered around for a bit afterwards.

Saturday we wanted to go to a few panels about board gaming. We made it just in time for the first one we wanted to see, but it wasn’t quite what we were expecting. We snuck out a little early to go check out the floor till the next panel. It was SO CROWDED! When we went two years ago, it seemed that it had just enough people to not be a sad little comic con. This time it was packed! We could barely walk down Artist Alley much less stop and look at art. It’s sad because we really wanted to buy some artwork for our home.

We made our way to the Game Library which was awesome. You could check out a board game and they had a bunch of tables set up for you to play on. The selection was ok; they boasted there was over 200 to choose from, but I’m not so sure that was entirely accurate. Then again, board games aren’t all huge boxes. Anyway, we got to check out and play Smallworld, a game I’ve been dying to play.

One of the guys working the library came over and taught us how to play. Then he gave us twenty percent off at the game booth across the way, so we bought a copy of Smallworld (which was super fun!) and Munchkin, another game I’ve been dying to get my hands on.

Sunday we made it just in time to set up the booth. It was a fun 3 hours and I finally had a chance to take photos of some of the costumes at the Con.

There was a really cool game station across from us, but we forgot to try it out after our shift was over. Instead, we started to head back to the celebrity signing tables to get our friend, Dave, an autograph. Sunday there were  less people, so walking around wasn’t a complete nightmare. As we were walking towards the back, I found Mike Mignola’s table. There was only one person there and I got a signed Hellboy print (sorry I don’t have a photo). Then we made it to Cassandra Peterson’s table and I got to meet Elvira! I was so excited. I got her autograph for Dave and she was the nicest person in the world. She even said I could be her long lost daughter (we’re both red heads).

She wasn’t in Elvira mode at the con, but in case you didn’t realize who I was talking about, I am putting this image up.

It was a great time. I have to admit, though, that if we didn’t get free passes for working at the con, we wouldn’t have gone. It’s just too much money. Still, I’m glad we went! 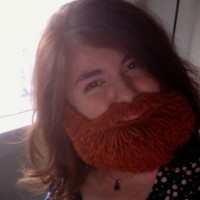